skip to main | skip to sidebar

When a friend decided to breed her Australian Shepherd, I jumped at the chance to have one of his puppies. A pup from a sire with similar lineage to my first aussie with the same bomb proof personality was a fantastic opportunity. Gus came home with me at about 10 weeks of age. The breeder couldn't decide which male she was keeping and so she hung on to Gus for a few extra weeks.

I had the opportunity to watch the bitch interact with the puppies and in hind sight, she may have been a little too "heavy handed" with her brood. I've seen good mamas before and this mama seemed to me to be a little too corrective, perhaps, it wasn't her nature as much as the fact that the pups were 10 weeks old and she needed them to be gone. But I'm not a dog, or an experienced breeder, perhaps this kind of behaviour is normal...

He had been temperment tested by a third party and was this individual's "pick of the litter".

When I brought Gus home I don't recall any alarm bells going off about his behaviour. He was harder to crate train than I remember with my first aussie, whimpering and crying in the kennel unless my fingers dangled inside, but this only lasted a few days.

Aside from this, I have no memory of anything sticking out.

Gusto's Progression from Reactive to Aggressive

We began puppy kindergarten when he was about 16 weeks old. Unfortunately the only training place in town at the time didn't allow the dogs to socialize with each other, and worked solely on obedience. He reacted very strongly to an energetic golden retriever puppy. The puppy's owner and I arranged to meet early the following week at a park across the street where we allowed the puppies to meet and greet and play off leash. He got along with the golden better that night. But continued to be uptight in class. I don't recall if we met early again. I don't think so. I didn't know her, and it was hard to be the owner of the obnoxious puppy.

At 5 months of age he put his teeth on someone's hand who was pretending to judge him for conformation. (No damage - thank you bite inhibition training)

He bit his first dog in Clicker class at 6 months of age. A black lab type dog walked by him while he was working and he turned quickly and bit the dog in the hindquarters (No damage - thank you dog friends who he could play with).

At a year of age he could still play off leash with other dogs, but he was becoming increasingly reactive to new dogs, noises and people. Sometimes he would charge dogs and give them the same "cheap shot" he gave his first lab described above.

At two years of age he damaged a friend's dog's ear. I continued to walk him off leash around other dogs muzzled. I convinced the breeder that he wasn't a breeding prospect and she agreed to let me neuter him.

By two and a half years of age he had given minor injuries to the ears or face of all of his dog friends as well as his two canine housemates. He had exhausted the tollerance of even my closest "doggy friends." He was no longer allowed to socialize with dogs outside of the two aussies I lived with.

I started to tell people he was dog aggressive.

Lots of people, including his breeder had a variety of ideas on how to "fix" Gusto. Most involved pain corrections or fear/intimidation corrections when he lunged and barked at other dogs. By now I had done a lot of reading on the subject and although I was sure correction could supress the outbursts, I was convinced that it would not really get at the root of the problem. I was sure classical conditioning and desensitization training was the way to go.

I continued to work with him in training classes where he had to work around other dogs. He was uncomfortable, but was able to focus. He wore a gentle leader head collar so that I could easily control his head. I worked on presenting treats around other dogs in an open bar/closed bar fashion. I attended training classes that were flexible enough to allow me to work on his issues with other dogs. He was able to work around other dogs and take treats. I knew I could control him, but I lived with the constant stress of wondering if someone else's dog might wander into his comfort zone.

When Gusto was three, we moved to Southern Ontario. Now he only lived with one other dog and I didn't have access to the flexible training classes with the instructor who knew and understood us. We continued to work in the parks when the opportunity presented itself. We prayed we wouldn't meet loose dogs, and informed people with dogs we met that he was dog aggressive. I started a new job and he didn't get much work.

At four I started him in Agility training with a local trainer. Over the next two years he learned all the equipment and he learned to play tug, though it is definately a stretch for him to tug around other dogs. He competed at fenced venues a few times and didn't loose focus on course except once when a dog squabble broke out just outside the ring. He charged the fence, but called off and finished the course.

Gusto is now nine years old. I'm working for a vet clinic teaching obedience classes and we have begun teaching classes for reactive dogs. FINALLY Gus will get the work he really needs. This blog will journal our progress in classes. Will we ever really get to compete in agility? Only time will tell. Follow our journey, if you choose.

First of all today is Gusto's Birthday! He is now a decade old. If I want to trial again in agility with this dog before he is too old I really have to push his progress.

I brought really great treats (leftover cheese burgers) and Gusto was VERY motivated to tune in to me.

In the first working session I worked opposite a Shih Tzu X Lhasa who has a bit of an off gait due to a crooked front. He also wears tags, which as I wrote last time is a particularly difficult trigger for Gus. We did some T-greetings with S.E.S. (Sudden Environmental Change) where we kind of popped out in front of the other dog without much notice. We also did some jogging pass-bys and face to face greetings. Gus took a couple of longer looks at the dog, but other than that he didn't show any OUTWARD signs of reactivity. He was quite sharky though with his teeth which of course indicates tension in the jaw.

In our second session I worked opposite a Russell. We'd worked with him last time and so we were really looking to push these two dogs. We decided to use our 3 ring gates (like a long straight free standing baby gate) to make a divider between the dogs while we worked parallel recalls. The dogs were held or on a sit stay beside each other, but 15 feet apart with the gate making a barrier up the middle. Then we would call the dogs at the same time so that they were running parallel to one another. Both dogs were on flexible leashes. Gusto was great he took a few glances at the dog, but never charged the gate. In fact he took steps away from the gate showing avoidance behaviour. Yeah Gus! We decreased the lateral distance until the dogs were about 6 feet away, still with the gate between the dogs. Next we progressed to recalls from opposite ends so the dogs were running in a face to face situation. We increased the lateral distance to 15 feet again to start, but ended with them 5 feet apart. The dogs did so well at this that we progressed to the removal of the middle section of gate so that there was a 8 ft. window of open space between the dogs. To make it easier we backed up to the first exercise of the parallel recalls at a distance of about 10 feet. Again both dogs did exceptionally well. We decreased the lateral distance to 7 feet. We then did a couple of trials of the opposite ends recalls with the open section of gate at 10 feet of lateral distance. Again both dogs did really well. If anything, Gusto tried to create more lateral distance on his recall showing a definite effort to avoid the other dog. I thought he was fantastic.

In our third session we worked opposite the Shih Tzu X Lhasa we had worked opposite in session 1. We did the same progression I just described in session 2, but we progressed faster with this dog as neither dog was finding it difficult. Gusto really took it in stride. I'm not sure he really cared that we'd changed dogs. He did equally well with this dog as he did with the Russell.

Gus did really well today. I hope that we can continue to challenge him so that he continues to progress. In future weeks I hope to work opposite larger dogs as he finds them more challenging.
Posted by Heather at 6:05 PM 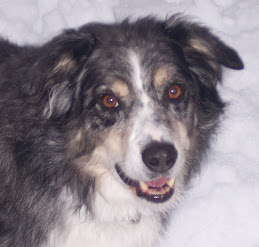